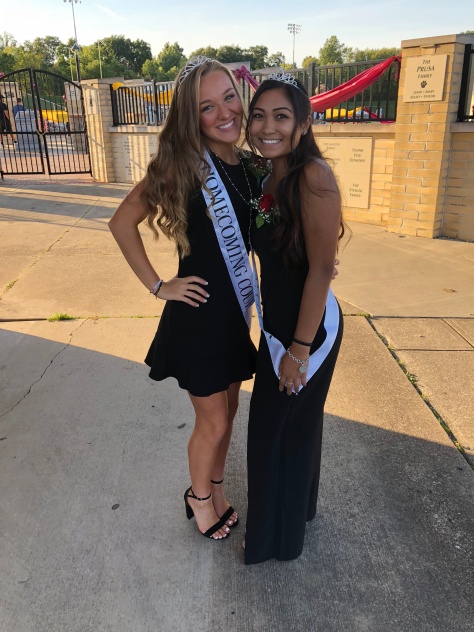 Every year, students vote people from their class to represent their grade for Homecoming court. The individuals chosen are looked up to, and it is a huge honor to be representing your class.

“It was a great moment and feeling being chosen for court. It made me feel very proud of myself,” Gilbow said.

Sophomores, Olivia Waickman and Clayton Mosher were chosen, and for freshmen Marissa Romano and Evan Droder were selected.

“I wasn’t really expecting to be on court so when I found out I was a little shocked, but really excited for the most part,” Romano said.

Once court was chosen, Student Council hosted a luncheon honoring and congratulating the students on court. All of the court events were organized by the committee chair Grace Laber, co-chair Maria Leonino, as well as committee members Nina Rorabaugh and Lexi Shabazz.

“I have been apart of the court committee for four years now, and this year it was so much more fun because since I’m a senior, I was comfortable with running everything because I knew most of the people. We had some obstacles, but for the most part everything ran smoothly,” Laber said.

Following the luncheon, the attendants went to a band practice to practice the halftime announcements and become comfortable with what to do at halftime.

On Friday, the first event court attended was the Homecoming parade. All members of court rode in convertibles through the parade and were recognized for being chosen.

After the parade, the students sat together under a tent for the first half waiting for halftime. Their family members came down and were able to take pictures before walking across the field.

During halftime, all 16 court members walked across the field with their escorts. They were recognized by stating their involvement through activities at the school and their future plans.

Most of court sat in the tent but football players Mosher, Gilbow and Cartwright were focused on the game. At halftime, the bulldogs were tied and the boys were feeling confident with their game.

“I was focused on the game, but was still nervous thinking about halftime. I was most excited to be there with my mom and friends. The experience was heartwarming and I will remember it for the rest of my life,” Cartwright said.

Similar to Cartwright, Bunday was also anticipating walking across the field. The moment was very special for her and her father.

“Walking across the field with my dad was my favorite moment. We both were looking forward to it and it was a cool moment for us both with the band playing and our family in the crowd,” Bunday said.

Everyone opened their boxes and the girl with red roses was Homecoming queen, and the boy with a red crown was homecoming king. Casalinova and Stebbins were crowned king and queen.

Regardless of the outcome, everyone had an enjoyable time and made a memory that will last a lifetime. Ruth especially enjoyed her senior Homecoming experience.

“Overall I really enjoyed being on court, all of my best friends were with me and it’s nice to share that memory will all of them,” Ruth said.

This years court festivities ran smoothly by Student Council and the members. It was a special group of students and a special moment in all of their lives.